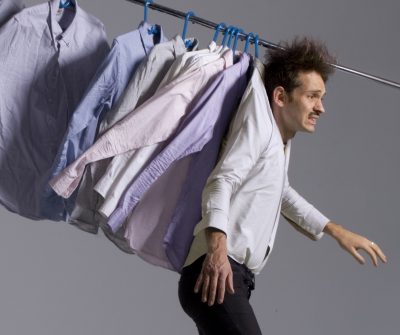 Have you met Joseph Herscher and his whimsical machines?

I think it’s time the two of you became acquainted. Introducing…The Page Turner:

Joseph uses ordinary household objects to create the most innovative, amusing, excessive and unnecessary machines you will ever see. In 2008 he created his first famous kinetic monstrosity—Crème That Egg—a complex, rickety, apartment-spanning chain-reaction that led to the smashing of a single Crème Egg and millions of YouTube views.

He had no reason to do it, he just did. There is magic in that.

Here’s another one for you, his most recent. There’s nothing as risky as using animals as core components of a machine:

Joseph’s mind must be working on a different plane, seeing uses for objects that elude the average person, visualising connections that simply shouldn’t exist. (And maybe, after Joseph’s machine is done, they never will again.)

To give a different spin to his whimsy, Joseph also created a short, semi-silent TV comedy for our enjoyment: Jiwi’s Machines. This cheeky, cute little four-episode production takes me back to The Adventures of Lano and Woodley in the late 1990s: twerpy characters; colourful, interactive sets; fantastic physical comedy; all tied together by a strange combination of charm and cringe.

But none of the above is why I write this article. It was the following documentary that captured my mind earlier this week:

The Joseph Gets Dressed documentary follows Joseph during his time as Knight Artist-in-residence at the McColl Center for Art + Innovation in 2013. His many months at the Centre (and in preparation) culminate in the creation of just one machine—The Dresser—and while that contraption is certainly amusing, it was the documentary itself that captivated and inspired me.

You see, Joseph Gets Dressed sets Joseph as the attraction, not his machines. And he is a worthy subject.

Joseph is a man living a life with many of the characteristics I aspire to.

I see an unhurried, unfettered mind, free to roam and experiment the pathways his unusual synapses are forging. He is patient, dedicated and hard-working, untethered to any future beyond the end of that rolling ball.

I see confidence and enthusiasm, a complete lack of self-doubt because the man is, above all else, building these amazing machines to amuse himself. He is his own slave and master, and it is only his own vision that matters. He succeeds or fails on the roll of his own ball.

I see bold choices, from the McColl Center for taking on such a fringe, unusual artistic resident, to Joseph himself for bravely casting off a life of financial stability to pursue something that makes sense to him. What must life have been like for Joseph, I imagine, working as a software analyst for five years while his brained whirred in different directions?

In the documentary Joseph comes across as emancipated. Gentle, diligent, and emancipated.

The documentary calmed me. It reminded me why I write, what I am trying to find at the end of each sentence, at the bottom of each page, by the end of each book. Adventure, deep inside myself. The words that make sense to me.

Joseph Herscher: I am inspired by your work and your commitment. Keep up the brilliance.

(As a final word for Australians in my audience: is it just me or is Joseph a doppelganger of The Chaser’s Craig Reucassel? Some of those facial expressions – uncanny!)