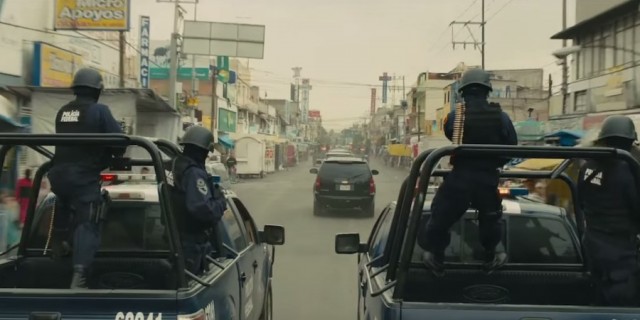 I don’t get to see a lot of movies. I have two young sons and a deficit of reliable babysitters, so my love of the cinema is generally unsated.

But not last weekend. Last weekend my wife and I managed to escape for long enough to see a rather fine piece of cinema called Sicario. (For those playing along at home, Sicario follows a helpless-looking hostage rescue operative (Emily Blunt) who is seconded to a mysterious government task force. She joins a smug Josh Brolin and a surly Benicio del Toro to take down a Mexican drug cartel.)

When you only get to see a handful of movies a year, there is a lot of pressure on a flick to perform. I am very pleased to say Sicario performed (unlike Inherent Vice, which is the only other movie I’ve seen at the cinema this year).

But I’m not here to review Sicario. I’m here to talk about one specific aspect of the movie: the music.

From the very first scene, an ominous, gravelly, resonant base is introduced. It pulses in and out during the ensuing action, only letting up when the initial hostage situation is resolved. Then, when the cuffs are on and the investigators are nosing about the now-conquered property, the music starts up again. At first it is soft, almost part of the background, but then the beat starts to grow, drumming in your guts and vibrating the cinema speakers.

You know something is about to happen. And believe me, it does.

For me, the music was the most memorable part of an excellent movie. Another recent movie, Prometheus (Ridley Scott’s prequel to his science fiction film series Alien), had a similar musical presence. I could hear and feel that deep tremble long after I saw that movie, and it made an otherwise average flick quite affecting.

But there are some key differences between Sicario and Prometheus. In Prometheus, the soundtrack was loud, penetrating, and most of the time overwhelming. It sounded external, alien and powerful. It was the threat of something bigger than you, waiting to devour you.

In Sicario, it was internal. The slowly emerging beat was trembling. It spoke of doubt and anxiety, building as the main character entered further into the unknown. It was the thudding of her increasingly nervous heartbeat. It boomed as stressful situations approached, then dissipated when nothing transpired.

The reason I bring this up here is because the feeling Sicario’s music evoked is very difficult to replicate in a novel. I have tried, and continue to try, and have hopefully succeeded for some of my readers. But it is certainly difficult. Music effects immediately and viscerally. It is a physical sensation. In a novel, words can describe sounds, or be structured to control the reading tempo, but can they replicate this intense effect?

This is where I want your feedback! What books have you read that have made you feel uncontrollably anxious, that have evoked a heartpounding sense of dread? Have you ever felt physically liquid with nerves, as though you were standing next to the main character, their heartbeat thumping in your ears?

If you have, then name the book in the comments. And, if you want to go deeper, let me know why you think it affected you so deeply. If you convince me, I’ll read it!