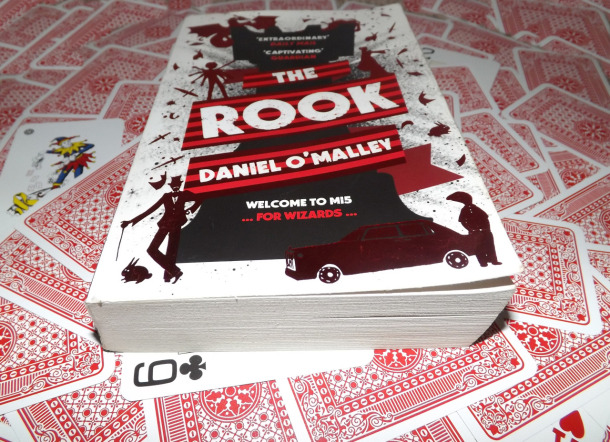 Another one of my posts from the ACT Writers Centre’s CAPITAL LETTERS blog.

The link to the article is here, or you can, as always, read the full text below:

I went to the same primary school as Daniel O’Malley; he was two years ahead of me. When I read in The Canberra Times in 2012 that a genre novel he had written had just been published (and that he had a received a healthy advance for it) the closeness of our worlds made my own aspirations feel so much more achievable. Now, with the next novel in his supernatural series, Stiletto, about to be published, I thought it the perfect time to chat to the author about his path to publication.

To start us off, can you tell us a little about your background?

I’m a Canberra boy from birth. I emerged, squalling, into the world at Royal Canberra Hospital and I spent my first years in the university housing estate in Garran. It was the best place to grow up—lots of young academics and their spouses and their wild children running around. I attended Garran Primary School and Canberra Grammar School, then bolted off for a gap year in London before heading off to Michigan State University to study World History. I got my Masters in Medieval History at Ohio State University before I moved back to Canberra. I was the rudest person working at the Canberra Centre Coffee Club (reportedly), then segued into the public service.

How did you get into writing?

Through letter writing, really. That was when I first had to be entertaining with my writing. My parents were willing to pay for me to go away to the States for university, but the condition was that I had to write to them at least once every week, and it had to be interesting.

Your first book, The Rook, was published in 2012. How would you describe the novel?

It’s a supernatural thriller set in the British Civil Service. A woman wakes up in a London park, surrounded by dead bodies and with no memory of who she is. She finds a letter in her pocket saying “Dear You, the body you are wearing is mine. I knew I’d lose my memories. Go here, do this. Be careful, you have enemies.”

What inspired the novel?

Some boring meetings and lectures at grad school. I’d entertain myself by pretending that I was someone who had just been beamed into my body Quantum Leap-style. I got to wondering how easy it would be for someone to take on my persona, to fake being me. And that’s where The Rook started.

What was your process for writing it?

I wrote the first letter of The Rook (the book is punctuated by letters from one character to her amnesiac future self) on a snowy night in Ohio when I just couldn’t be bothered translating any more Latin. And then I left it there for more than a year, squatting in the back of my mind. Then, on the last day of grad school, with no more homework to do or papers to grade, I opened it up and starting writing it again. I didn’t have a particular plan or layout, I just discovered the world along with the main character. I got a few hundred pages written that summer (and suffered a disastrous 24 hours when I lost them through a computer crash, then found them through some miraculous backup system). After moving back to Australia, it was lots of evening and weekend writing.

Now a second novel in the series is about to be released. What can you tell us about Stiletto?

It’s a sequel to The Rook, so we see a lot of the characters (those who survived, anyway) returning. The main character from The Rook, Myfanwy Thomas, is overseeing the merger of two supernatural organisations that absolutely loathe each other. We see a lot of backroom plotting, and some big supernatural terrorism. Oh, and a supernatural serial killer! And a kick-ass evening gown.

How does it differ to the first book?

While Myfanwy is an important character here, we actually have two new main characters. Felicity is a soldier who can read the history of things she touches, while Odette is a Belgian fleshcrafting alchemist. They hate each other, so of course they’re thrown together with strict orders to be nice. And possibly to kill each other.

I read on your website (www.rookfiles.com) that there is also a television show in the works based on The Rook. What can you tell me about that?

Stephenie Meyer (of Twilight fame) is the producer. She reached out to me and said she’d like to try making a TV show of The Rook. She is working with Lion’s Gate and Hulu, and there are two astoundingly brilliant English screenwriters working on it even as we speak. I don’t have too much involvement beyond periodically getting questions from the screenwriters about some aspect of the Rook universe that I never thought of.

Your journey to publication is something many of us dream of. Can you take us through the process?

My agent is Mollie Glick of [US talent agency] CAA. I resolved, after the first novel I wrote didn’t get picked up by a publisher, that I would try to get an agent. I figured that the American market was bigger, so I would have a greater chance by approaching agents there. I spent a good amount of time polishing my manuscript before I sent it off, and I made sure I had a kick-ass introduction letter.

I spent about a year with my agent, reworking and polishing the novel until she judged it was ready to be seen by publishers. From there, the acquisition by a publisher (Little, Brown & Co) took a comparatively little amount of time, and then it was at least another year before my editor was satisfied. And then maybe six months before there was a slot open for publication.

Do you have any advice for people like me seeking a literary agent or publisher?

Cast your net wide. There are a lot of people out there, and lots of possibilities. Do your research, so that you’re approaching the right kinds of agents and publishers—if they say they’re not interested in romance or science fiction novels, don’t send them your romance or science fiction novel. And be careful, because there are people out there will take advantage of how badly writers want to be published—I was very careful to check out those agents who contacted me. See what other books and authors they’ve represented. I also consulted Preditors and Editors.

Like many of us in Canberra you are a busy public servant. How do you fit writing around that?

I just write where and when I get the opportunity. Most of the writing gets done in the evenings and on the weekends, with the occasional burst of lunch-hour typing. I enjoy my day job tremendously, and I think if I didn’t get to work with other people every day, I’d be much less happy.

Thanks so much for letting us into your world. Any final tips for aspiring writers?

Try to keep in mind that getting published isn’t always going to be a matter of talent or skill. You have to connect with the right person when they’re in the right frame of mind at the right time. There isn’t a line you cross wherein someone says “Now this has reached the point where it is worthy of publication.” Different people like different things.

For me, writing fiction is a pleasure, a challenge that I enjoy. It’s not easy, but that’s one of the things I like about it. I’d write even if I knew it could never be published.

Daniel O’Malley’s second book, Stiletto, is set to be released in Australia on 25 May.