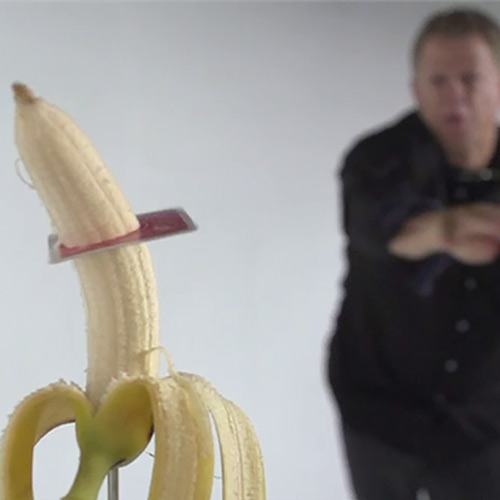 Episode 2: I Only Wish They Exploded

Ok, so this one is just rad. I’m not completely sure I understand the utility of the skill, but I won’t let that get in the way of some supreme awesomeness. And if I ever need a banana cut in half with a playing card from twenty paces, I’ll know who to ask.

Rick Smith Jr. has always studied magic, but it was only while playing a sock war at college that he discovered his true talent. Out of ammo, he picked up a playing card and threw it.

It sliced straight through his friends arm.

(He was a college baseball player at the time, which, biomechanically-speaking, must have helped.)

Rick now holds several world records, including the longest playing card throw (66 metres) and most accurate playing card throw (hitting a target from 15 metres away – that’s about twice the distance for darts). Give them a go yourself, you never know if you also have the gift…

But here’s the video I want you to watch. Such magnificent skill is nothing unless it is employed in the destruction of a range of fruit, vegetables and household objects.

Lesson 2: Master something you are naturally good at. Find a niche even within that. And, if it is at all possible, emulate an X-Man (except Cyclops. Don’t be Cyclops).

(For those who know what I’m talking about when I named this episode “I Only Wish they Exploded” and mentioned an X-Man, get excited: a Gambit movie is on its way in 2019. That’s next year!)

Next week: Another physically skilled craftsperson, but this time of a more energetic variety…

What is the world record for the longest basketball shot, and who holds it?