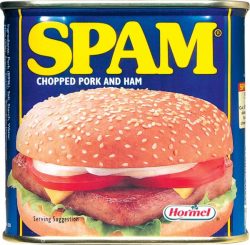 This website gets a lot of spam. Most it is in Russian or is trying to update me on the latest developments in erectile disfunction management, but sometimes those spam-bots are just downright friendly.

‘You are a very intelligent person!’ – Abet Spzoo

Thanks, Abet Spzoo. The internet can be a quiet and lonely place, and your words touched me. You might like to start a small fan club with my mother.

‘Wonderful article! That is the type of information that should be shared across the internet. Disgrace on Google for now not positioning this put up upper!’ – Fermindat

Damn straight, Fermindat. Disgrace on Google! Let’s ignore the right-wing biased search engine results, massive tax avoidance and spying on your Gmail account and focus on the fact they are not upping my upper!

Then again, if I wanted my up uppered, perhaps I should just buy some of those blue pills that Russian gent keeps offering me?

‘Stunning quest there. What happened after? Thanks!’ – Kanira

Thank you for your kind words, Kanira. Stunning indeed! I doubt Bilbo or Zelda ever got this sort of praise!

‘There is no independent auditing and monitoring of honey called active manuka honey or manuka honey with any descriptive other than that labelled UMF.’ – Yingfunghs

I know Yingfunghs isn’t the only one concerned about this. Hive been talking about this for a while now, and I’m not just waxing lyrical. People should bee careful when buying Manuka honey, because it could be fake—at least, that’s the buzz. Comb the ingredients list or you could be in for a real sting.

But seriously, this is a genuine issue. Don’t be put off by my bad puns. I’m not pollen your leg.

‘There are no more free elections in the US, no more a country for the people and by the people. The Republic is GONE. The US now is like the USSR in 1990: everybody still considers the country to be great but there is nothing left of it but a thin veil of gloss on top of complete rot and decay. Purchase Sony CD architect nice camera when hardwired.’ – Poctza Kwiatowa

For a moment there I despaired that the Western world was disintegrating before my eyes, but once Poctza Kwiatowa finally reached his concluding remark I breathed a sigh of relief. Capitalism is indeed alive and well. If I hadn’t spent all my money on cialis, betcasino and информации, I’d be grabbing one of those Sony bad boys right now.

‘I have a great math homework book. They said it was our blood, and they had it twice that day. Lots of with the instances, pupils with the aforementioned section plagiarize without the need of recognizing substantially about plagiarism implications in superior university. If you can’t you need to go back to step 3 to review your verses again. Beyond that point the boycott is compound in varying degrees. Near it was the dry course of a considerable river, whence the water for irrigation had formerly been conducted.’ – EssayHek

It’s like you just pressed the auto-word on a text message over and over, EssayHek. Have you readers ever tried that? Open up a new text message, select the suggested word in the middle and just keep pressing it over and over. For example, I just got: ‘I am a little poo to get to the giraffe scene in the same way as the monthly childcare support.’ (I have kids. It makes sense.)

And that’s just one week’s worth of comments. If I get any other beauties I’ll let you know.

In the meantime, if anyone needs to buy auto insurance, to find a mature age lady in the local area or wants to ‘komentar pelanggan my jelly’, just leave a comment.