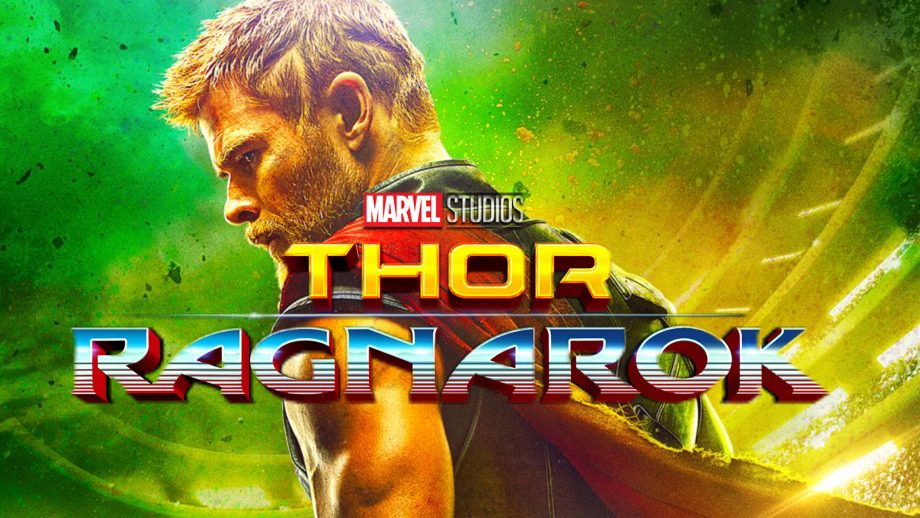 Taika Waititi was a surprising choice of director of the third movie in the Thor series, Thor: Ragnarok. Primarily known for his quirky, feel-good comedies—most recently the surprise hit of 2016, Hunt for the Wilderpeople—Waititi does not seem a natural fit for the Marvel Cinematic Universe.

But it works. And not only does it work, but the hilarious space opera Waititi has produced is one of the best superhero movies of the modern generation.

Credit should go to producer Kevin Feige and the Marvel monolith not only for making such a bold selection, but also for giving Waititi so much free rein. Waititi’s style and wit are present throughout the movie, from the hilarious first scene where Thor (Chris Hemsworth) is dangling above a lava pit and awkwardly rotating to face away from enemy, to the final scenes where an emotional denouement is made all the more touching by the insertion of a well-timed gag.

Waititi is not credited as a writer, but his influence on the delivery and timing of the jokes is undeniable. And then there is Corg, the CGI rock alien played by Waititi himself, who almost steals the movie with his earnest, unselfconscious amiability—and the funniest lines. It is a pleasure to watch a superhero movie where the laughs are good-humoured and self-effacing rather than smug quips. 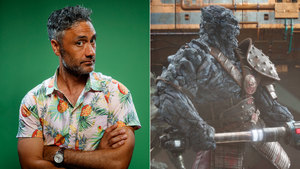 These before and after shots of director Taika Waititi are a cautionary tale for those who question the importance of moisturising.

Casting is another area Waititi clearly had sway. The appearance of Rachel House—a Maori actress who played relentless child services worker Paula in Hunt for the Wilderpeople—is the most obvious selection. Sam Neill (also in Hunt for the Wilderpeople, and another New Zealander to boot) makes a sly appearance, and there is a disproportionate number of Australian and New Zealand talent, including in key roles. The only notable absence is Jemaine Clements (of Flight of the Conchords fame), which is surprising given he has already proven his (mutton) chops in quirky alien roles.

Speaking of casting, this film is stacked with talent. In addition to the big names from previous Thor movies (Tom Hiddleston, Anthony Hopkins, Idris Elba, Mark Ruffalo, Benedict Cumberbatch and Karl Urban) we also get a large number of surprise appearances. Matt Damon slides in for a tongue-in-cheek cameo, while Luke Hemsworth (Chris’s older brother, the least famous of the three Hemsworth siblings) also appears to play Thor himself—in an Asgardian play. And at the top of that cameo pile is Jeff Goldblum, playing En Dwi Gast, the Grandmaster of a borderlands planet Thor finds himself marooned on. Goldblum is in imperious form, relishing the role and single-handedly carrying scenes that might otherwise have been drab exposition.

Cate Blanchett (another Australian) is also in the movie as Thor’s older sister Hela, Goddess of Death. It says a lot about the film that she just might be its weakest part. Although she has a formidable presence, prehensile lips and aggressive styling, she lacks the physicality to pull off a fighter so potent that she single-handedly slew all of Asgard’s Pegasus-riding Valkyries. Blanchett’s Hela is also one of only two characters in the movie to lack humour—in essence she is Thor’s straight (wo)man, and it constrains her performance.

Hela always had trouble getting through doorways.

Surprisingly enough, the humour is where Thor: Ragnarok nearly collapses under its own weight. The jokes are so numerous at times the movie drifts toward sketch comedy. The superheroes become the butt of the humour, regularly fumbling or appearing absurd (Thor first among them), and it leads the audience to doubt whether these supposedly powerful, interstellar gladiators could actually beat the big bad. Luckily, in addition to being a brilliant comedic actor, Hemsworth’s raw physical strength (those triceps never stop twitching) leaves the audience confident that Thor truly is a God incarnate, rather than bumbling buffoon. But at times it’s close. 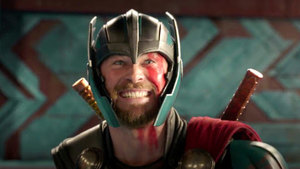 Thor was starting to think there was something else in those cookies.

A clever technique used to prevent the story drifting into absurdity is the humbling of Thor. After several Avenger films with characters who are all but invincible—making it difficult to become emotionally invested in their struggle—it is a masterstroke to bring the almighty Thor down a few pegs. The scene where Hela strips our hero of his greatest strength is sudden and shocking, and is all the more affecting because the audience has just spent twenty minutes watching Thor joyously and triumphantly use the amazing power he now no longer has at his disposal. The effect? The humour has an undercurrent of fragility to it. The audience laughs, but is nervous. Because our boy might just get hurt.

And believe me, people do get hurt. A favourite Avenger bleeds for the first time, and it is frightening to see that mortality. Another favourite loses an eye. And many sidebar characters—even the cute comedic aliens we come to love—don’t make it through to the end.

Another near miss is the amount of time spent on Goldblum’s gladiatorial garbage planet. It looks beautiful and it is certainly an entertaining diversion, but the deviation takes up half the movie and yet is in no way required for the resolution of the primary plot arc. This is where Thor: Ragnarok becomes something of a space opera rather than a true superhero flick—more Valerian and the City of a Thousand Planets than Guardians of the Galaxy (though don’t take that to be a bad thing). Still, such is the power of Goldblum’s performance and the surprise (and thoroughly enjoyable) arrival of an Avenger’s fan favourite that it is all forgiven. If anything, the story becomes a little staid and predictable when it returns to the main plot.

A little sidebar on diversity. Thor: Ragnarok features an effortless mix of ethnicities and accents. It is joyous to behold. Faces of all colours and shapes bless the screen, and no-one seems to have been forced to squeeze into an American drawl. And you know what’s weird? It barely raises an eye. Rather than the mix feeling inconsistent or incongruous, it comes across as rich and natural. And it makes me wonder how we’ve spent so many centuries being so hung up on race. There are a growing number of movies and TV shows with this sort of natural diversity (rather than token additions to meet an ethnic quota) and it only strengthens these productions.

Add to that the fact Blanchett’s Hela is the first female villain in the Marvel Cinematic Universe and we have the start of a much-needed diversity balancing in films. Why has it taken so long? 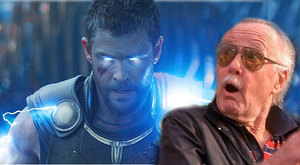 Back to the review. An important question to ask is: do I need to have seen the other Thor or Avenger movies to enjoy Ragnarok? No, not at all. There are some Easter eggs in there for the die-hard fans, and the movie is also a vessel to tie up loose ends from Avengers 2. But it stands alone completely and is an enjoyable comedic and visual spectacle all by itself.

Thor: Ragnarok is one of the best super hero movies of the modern generation and a damn fine film in its own right. Which is important, because, apart from Deadpool and Logan, superhero movies have been in a slump since The Avengers in 2012.

Go see it, and catch Waititi’s back catalogue while you are at it.