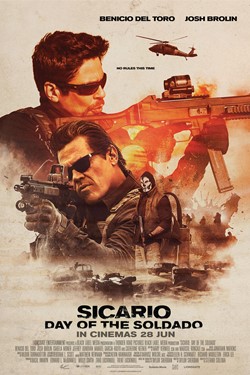 It was nearly three years ago that I wrote this article in praise of the music in the 2015 war-on-drugs thriller Sicario.

Sicario: Day of the Soldado is the sequel to that film, and it was with great excitement that I fronted up to my local cinema to see what could possibly be done to surpass the original.

Alas, surpassed it wasn’t. Sicario: Day of the Soldado is a fine movie – a good movie, even – but it doesn’t have the same narrative punch and tension that the original enjoyed.

So what went wrong?

Let’s start with the music. Sicario’s score was its highlight. Resonating tones vibrated through the cinema, infecting the audience from the first shot. The music pulsed in and out, leaving the audience disoriented and overwhelmed. It resulted in a physical response: we were on edge the entire movie.

Sicario: Day of the Soldado employed similar musical accompaniment, but it didn’t have the same impact. It was a more traditional orchestral affair, which was effective enough when building up to a dramatic action scene, but lacking when an ominous background track was required. And with the focus of the sequel more on these action sequences than the menacing suspense, the music was often absent altogether. Instead we are treated to crackling automatic gunfire and the sound of spent ammunition hitting the road.

But it wasn’t just the music. The point of view character in the original was Kate Macer (Emily Blunt), an FBI Critical Incident Response Group agent seconded to a mysterious US Government task force taking on the South American drug cartels. Because Macer is being used by the CIA in the movie, she—and the audience—has limited access to information, leaving us nervous, disoriented and suspicious the whole movie.

Emily Blunt is not in the sequel. Instead we follow Josh Brolin’s Matt Graver, the very same CIA manipulator from the original. With Graver’s insider point of view comes a reduction in the mystery. Character motivations are more obvious, and the set-ups and payoffs often telegraphed.

And then there is the choreography of the action sequences. The original (directed by Denis Villeneuve) weaves the music, the high quality acting, the menacing setting and glaring lens filters together to leave the audience constantly on edge. The tension is ceaseless, but the crescendos aren’t inevitable: sometimes Villeneuve allows the stress to subside without an explosion or gunfire. It makes every moment from that point onward all the more volatile.

The sequel (directed by Stefano Sollima, a relative newcomer to Hollywood) uses a similar recipe, but fails to find that unpredictability. As if to make up for this shortfall, Sollima occasionally contrives interactions, as if to remind us that a crescendo is coming. Unfortunately, it only serves to undermine the tension.

Take the paramilitary road mission into Mexico, mid-movie. Three American military jeeps are at the centre of a Mexican police convoy. The audience is unsure how concerned we are meant to be, and the weave of suspense isn’t enough to assure us of the potential scale of the upcoming conflict. The convoy soon moves off the tarmac and onto a dirt road, which is an excellent device: the dust reduces visibility, the uneven road surface increases cabin noise and jerks the camera around. But then, right when our anxiety should be reaching its own natural peak, CIA man Matt Graver offers up a dud:

It was an unnecessary line. The same could have been said with a look, using Brolin’s fine acting skills to hint at his nervousness. Instead Graver’s one-liner diffuses the tension by flagging the inevitability and imminence of the coming action sequence. Moments later, it hits us, right in the windscreen.

At this point I couldn’t help but compare Day of the Soldado to the original again. In Sicario there is a similar military convoy jaunt into Mexico, but the tension is almost overwhelming. It’s just grim faces and a nervous Emily Blunt bouncing in a Humvee. The music pulses, the tension builds…and nothing is inevitable.

Which is why it’s somewhat unfair to compare a sequel to the original. The first Sicario benefited from an unfamiliar tone and format, and this helped keep the tension on point. Day of the Soldado naturally suffers because the surprise factor is diminished. We are now less afraid of the dark.

It is difficult to review a sequel without comparing it to the original. It might not even be fair. Luckily, I saw the film with a trusted friend who had absolutely no exposure to the original Sicario. I asked him for his opinion.

He enjoyed the movie. It didn’t blow him away, but it was a well-made production with exciting action sequences, quality performances and enough menace to make him uncomfortable. He pointed out a couple of clangers, where an upcoming event was flagged too early and obviously, but that didn’t lessen his enjoyment of the film.

It sounded like he would be back for the inevitable (and flagged) third instalment.

Sicario: Day of the Soldado is a fine film. Good, even. It’s just a pity it exists in the shadow of its excellent predecessor.