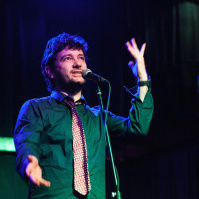 Head to actwritersblog.com/2016/03/08/first-encounters-with-a-poetry-slam/ to read about my adventures at Canberra’s biggest poetry slam, BAD!SLAM!NO!BISCUIT!.

Or you can just scroll down!

First Encounters at a Poetry Slam

Poetry is intimidating. For many (me included) it can come across as pretentious, or stuffy, or borderline incomprehensible. So if you add to that four exclamation marks and a braying crowd, you have an event that I didn’t think would appeal to me.

“There is this misconception of constant yelling at poetry slams,” BAD!SLAM!NO!BISCUIT! co-creator Andrew Galan tells me. “It is so much more than that. The best thing you can do is come along and see what you think for yourself.”

That is what I found myself doing one third Wednesday of the month at the Phoenix Pub.

Poetry slams. Invented by American Marc Smith in the 1980s, Andrew describes these events as “a broad framework” for a night of entertainment based around poetry performed by members of the audience. “They are a leveller,” Andrew explains. “They are about having fun, drawing out an honest response from people. No polite claps!”

When I arrive at the Phoenix (a narrow pub in the Civic bus interchange with brooding, Gothic portraits on the walls and ineffective antique lamps in the rafters) the hundred-strong crowd is already being worked into a hooting frenzy by the MC (Master of Conflicts) Joel Barcham. Joel—not only an engaging speaker, but also a Genuinely Funny Guy—is explaining the rules of the night: sign up and get two minutes on stage. Take any longer and the crowd starts chanting BAD!SLAM!NO!BISCUIT! (which was as close as I got to finding an explanation for the name).

I slink over to a miraculously spare seat and find myself between Laura (a BAD!SLAM!NO!BISCUIT! veteran, having attended nearly every month for the last six years) and John (a BAD!SLAM!NO!BISCUIT! newcomer, fresh out of Adelaide as a new graduate in the public service). Both have signed up, joining twelve others, nearly a third of whom are first timers. Andrew tells me this is one of the most important elements of BAD!SLAM!NO!BISCUIT!: they have never had a slam without at least one new performer.

The first poet—Flawney—receives a rowdy cheer as he climbs up on stage. He speaks of pebbles, warzones and dogs, the crowd listening eagerly, respectfully. He finishes to resounding applause. It is over to the judges. Five random audience members are selected as judges for the evening. After each performance the MC asks them to publically award a score between ten and negative infinity based on whatever criteria they feel like.

One of the judges (a middle-aged woman with awesome hair) says she didn’t think Flawney’s performance was a poem. She is soundly booed by the crowd. But I notice something: this isn’t West-Coast-Eagles-fans-at-Subiaco belligerence. This is inclusive, we-are-all-in-on-the-joke revelry. The crowd is smiling. The judge and her awesome hair are smiling. I find myself smiling, too.

After a few more performances, a comedian—Shahed Sharify—takes the stage. He is one of the feature acts, a paid performer who supplements the crowd-derived entertainment. Acts are sourced locally, nationally and internationally, and tonight a band and a visual artist are also on the bill. “But feature acts are not the pinnacle,” Andrew reminds me. “They are there to inspire and provoke.”

I wonder, though: has anyone lived the dream and gone from BAD!SLAM!NO!BISCUIT! newcomer to paid feature act? Andrew simply smiles. “Of course they have!” he says before reeling off a list of names.

My new friend Laura is up next. She blows the judges away with a gentle romance called Wrap me up. She gets some eights, a ten. She is visibly giddy with delight, never having received such scores before.

A metal bucket is passed around. BAD!SLAM!NO!BISCUIT! is a free event run by volunteers, but they like to pay their headline acts, and it costs to publicise the event. A $5 donation is suggested, but it isn’t monitored. The bucket pings happily.

Erin gets up next. She has been loud all night, and performs an angry, aggressive poem about feeling pain that appears ad-libbed and involves walking into the crowd and shouting at them. I cringe. So do many others. But once the all-too-glacial two minutes are over, the festive atmosphere quickly returns. If anything, it is even stronger for the shared awkwardness.

After the band (Purple Heat; fun and irreverent, I can’t help but bop along), my new neighbour John does a fantastic job on stage with Glange Slam, a poem about his recent bout of glandular fever. The crowd love it, but the judges are lukewarm. He doesn’t get the scores needed to win, but he does receive the traditional three full-body hugs from random crowd members for being a first timer.

Time for the winners to be announced. Anyone who is keeping score knows Sarah will be victorious with Home is, though I preferred Alex and her lyrical, witty, somewhat pervy poem about her lust for her barista. First timers get a prize as well, all selected randomly from a plastic bag: a chocolate bar; a calendar from two years ago; a pencil case; some banana bread.

The dorky prizes highlight a truth of slams. “It isn’t about winning,” says Andrew. “The judges are there to challenge the performer, to facilitate crowd engagement. It is about having fun!” Laura reluctantly agrees, but still seems devastated she didn’t win despite her best ever score.

I am surprised to find it is already past eleven and I have stayed through the event. I was initially put off by the thought of a night of poetry, but BAD!SLAM!NO!BISCUIT! is so much more than that. It is a variety night with constant entertainment, a lot of crowd-fuelled fun, and a throbbing pub full of friendly people. Poetry is still at its core, though—and some genuinely good writers take the stage.

So if you haven’t tried it before, take Andrew up on the challenge. Give a poetry slam a go.