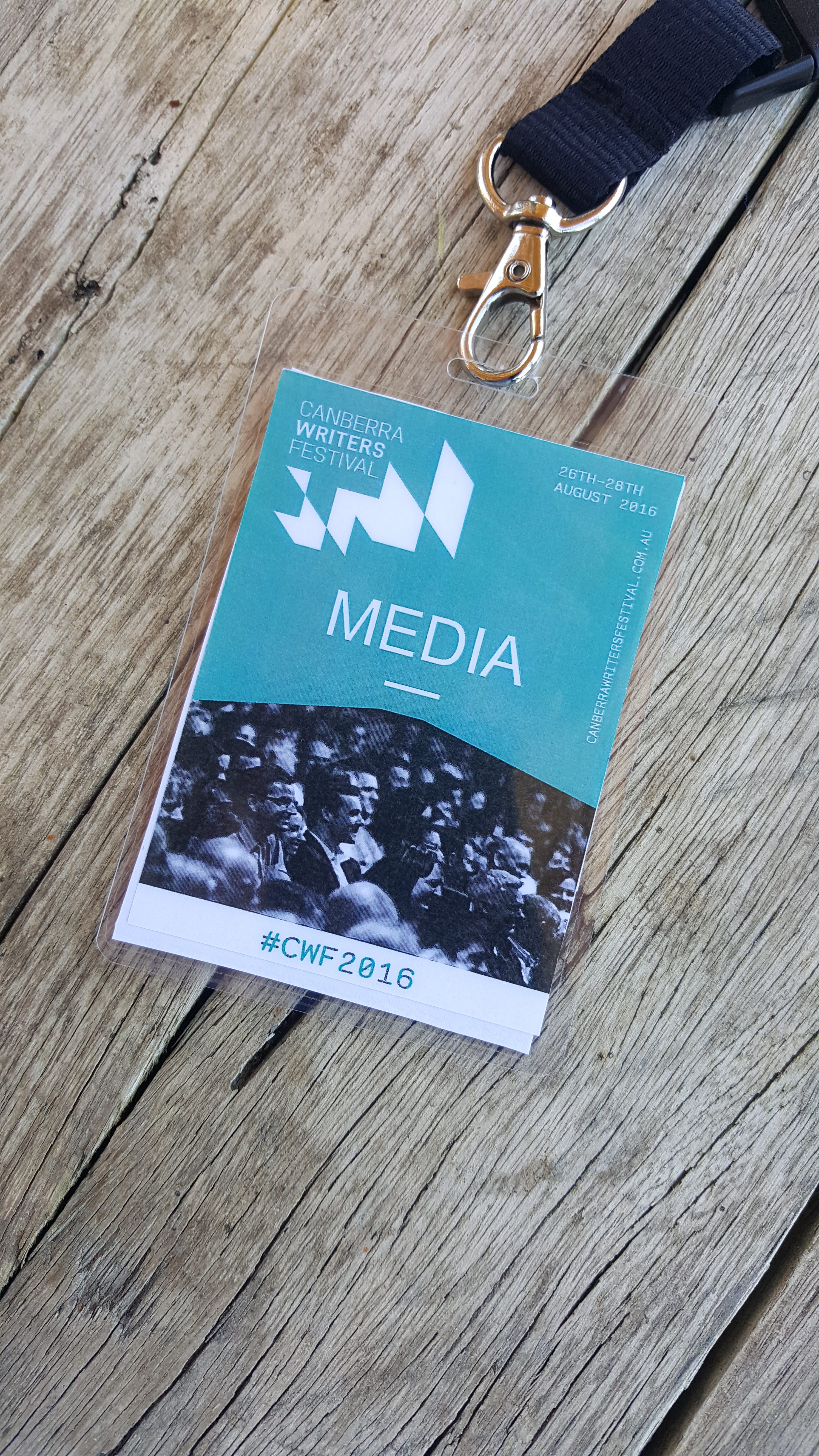 Another article I wrote for the ACT Writers Centre, this time about my experience at the inaugural Canberra Writers Festival over 26-28 August 2016.

The 2016 Canberra Writers Festival was my first major writing event. Among all the author interviews, book launches, panel discussions, writing workshops, festival artists, pop-up bookstores, signings, corridor networking, macaron towers, steak knife salesmen, and conga lines of Segways, I realised I had found something I didn’t know I had been missing.

The event was, to put it simply, brilliant. I am thirty-five years old, and a fool for not attending a writing festival sooner.

Session one – The one that made me cry

The first session I attended was a three-hour writing workshop with fantasy author Isobelle Carmody. Isobelle is a remarkably engaging speaker who would hate me labelling her a fantasy author. The very first piece of advice she imparted was for us to forget constructs like genre, audience, publication, and simply write what is true to ourselves. “Your first allegiance must be to the thing you are writing,” she told the room of thirty or so budding fantasy authors. “Starting with a genre is like opening up a cage and getting into it.” Judging from the captivated faces and high frequency nodding, her message resonated.

Then she made us cry.

To help draw out our genuine writing selves, Isobelle asked us to write a simple sentence: “I was sad because…” We all scribbled and scratched diligently in our notebooks, and a few eyes misted up at the memories. It seemed like a nice gentle exercise.

Then she made us read the sentences aloud. One by one, every single person in the room revealed the deaths, betrayals and losses that had shaped their lives. Voices were croaky. Lips trembled. But no-one backed out.

This is what being a writer is, Isobelle explained. This is the level of emotional honesty we need to give to our readers. It was a lesson I employed immediately after the session, returning to my latest manuscript and injecting the passion and emotion Isobelle had drawn out of me. I’m thirty-five! Why hadn’t I done this sooner?

The next day I watched the team of Steve Lewis and Chris Uhlmann interviewed by one of my all-time favourite steak knife salesmen, Tim Shaw. (Tim was brilliant, by the way. A well-researched interviewer with the right touch of the funnies.)

Steve and Chris are career journalists you’ve almost certainly heard of, and would recognise if you saw them. It is this experience that makes their Canberra-set thrillers—The Marmalade Files, The Mandarin Code and the recent release, The Shadow Game—so “close to the bone”, as Chris termed it. He has a point. Their novels should be ridiculous, exaggerated, farcical—and yet, as Steve and Chris prove to the audience, they are eerily familiar, and at times prescient.

Steve and Chris lamented the dire changes occurring in journalism (“what is a ‘Snapchat’ reporter?” Chris wonders), and peppered us with anecdotes about how hilarious political life can be (broken marble tables, wrestling with a prime minister, the unforgettable life advice “never fight naked”). But as enjoyable as the repartee was, as I looked around the room I noticed something. Where were all the young people? The median age in the audience must have been sixty-five. Is the subject matter—politics—that off-putting to youth, or is it simply too difficult to drag the youngsters away from Angry Birds and recaps of The Batchelor?

(On a side note, the setting for the festival was glorious. How beautiful is the Old Parliament House building? And I caught three new types of Pokemon there!)

“We have an irrepressible interest in the people in the community who do horrible things,” said Mark Tedeschi, QC and true crime author. But that is not necessarily why we read crime fiction, it seems. Rather, fiction allows us to explore these difficult issues from a safe distance, comfortable in the knowledge there will be a clear conclusion. “Fiction simplifies things, gives us the satisfaction of an ending,” adds the second panelist, Aoife Clifford (it’s pronounced ee-fuh, if case you were wondering), whose crime debut All These Perfect Strangers is set at a fictional version of the Australian National University.

The other key take away from the session was about truth. In fiction, in true crime, in life, there is never only one correct viewpoint. “Each perspective is a truth,” said Mark. In fiction, every character must act as though they are the protagonist, as though they are living the one true story. Again I was drawn back to my manuscript, this time seeing a new depth to my characters.

And that, for me, was the brilliance of the 2016 Canberra Writers Festival. My writing skills were challenged and enhanced. I drew inspiration and drive from the brilliant, insightful authors on stage, and from my fellow writers and readers in the crowd. I met people I might never otherwise have come across. And I fell headlong in love with writing and reading once again.

Thirty-five. What have I been doing with my life?